The PLUS Homes concept was conceptualised by Rohan Builders after a lot of research, design interventions and most importantly; putting themselves in the shoes of the end user. PLUS stands for Perfect Ventilation, Lively Light, Utmost Privacy and Smart Spaces: together they form the essential elements of good and healthy living.

At Rohan Akriti, not a single square inch is wasted and each home is designed to provide maximum space utilisation, ventilation and privacy. Let’s take a quick look at how Rohan Akriti has been diligently designed with the concept of PLUS Homes.

“Fresh air is the soul of life”– This fact has made the provision of natural ventilation the most crucial aspect of our design. A well-ventilated home can enjoy lower temperatures owing to seamless air flow between the indoors and outdoors. This, in turn, reduces dependency on fans and air conditioners, bringing down those pesky electricity bills and helping you save on maintenance costs. 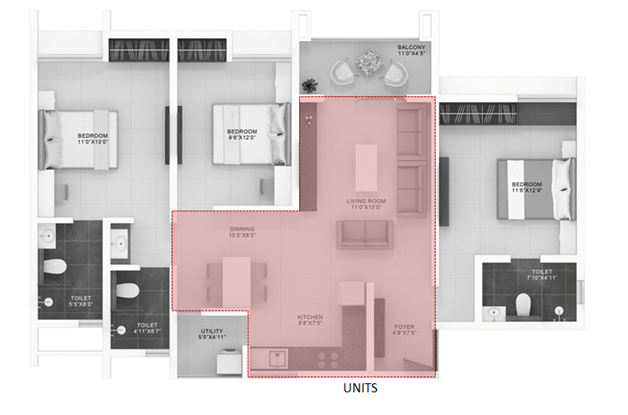 As you can see in the 3BHK unit plan of Rohan Akriti, the L-shaped placement of living room, kitchen and dining hall brings the natural sources of air closer and allows free flow of air between the window in the kitchen and balcony in the living room.

Breaking the monotony of the elevation…

The aesthetics of the building matters when you wish to create the perfect home with perfect living. At Rohan Akriti, the double-height terraces break the monotony of the elevation. So the façade does not look like a mass of balconies and concrete, but it will have breathing spaces which are green gardens running throughout the vertical façade. 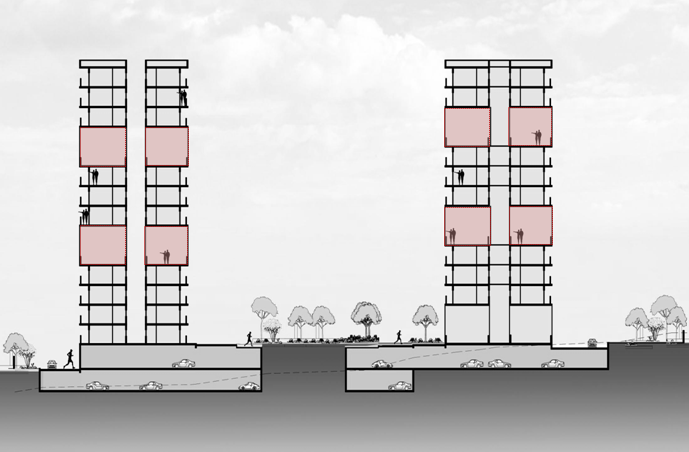 The double-height terraces also support in creating a Venture effect and increasing the wind speed in these areas due to the pressure differential. Hence, there would always be a steady draft of cool air flowing through these openings all throughout day and night. 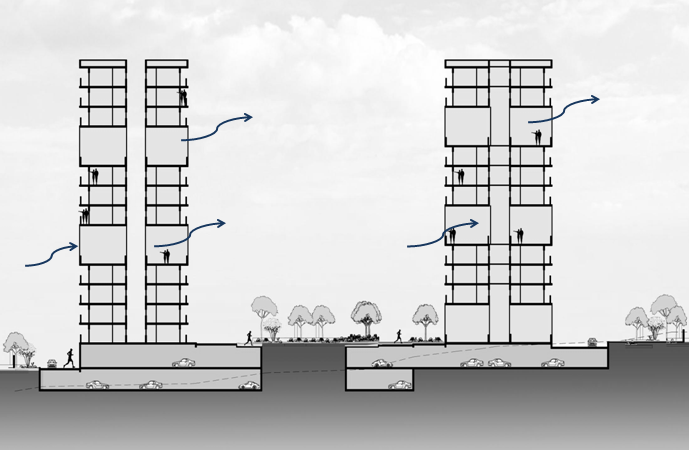 Lively light for the livable spaces

Natural sunlight is an excellent source of energy as it keeps you healthy and improves your productivity. When lots of sunlight floods your home, there is no requirement of turning on lights during the day. While enjoying the delightful sunlight, you would be helping the environment by reducing your carbon footprint and saving big on your electricity bills. 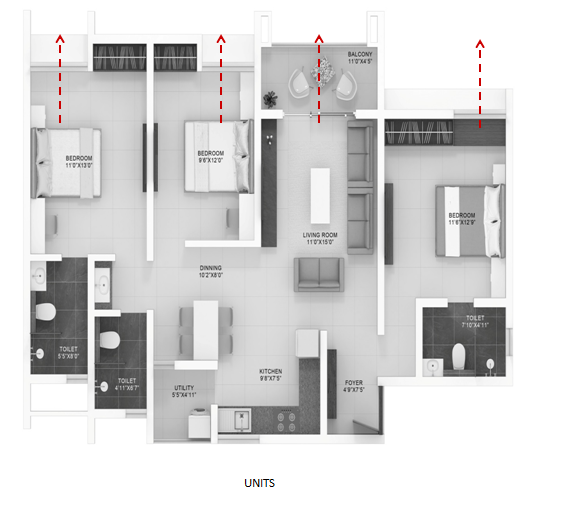 At Rohan Akriti, the large window openings towards the outside in each room ensure abundant natural light. We have taken special care of eliminating the dark corners in the house and keeping the livable areas well lit throughout the day. The bedrooms and living rooms that you use during the day have windows with a view towards the outer green areas. Meanwhile, the lesser used spaces such as toilets and utilities are towards the inner side.

Even the lobby areas are designed to be wide enough for free flowing light and airflow and it does not feel like a narrow passageway.

Eliminating buildings being shadowed by each other

In most of the residential apartments, the shadow of one building falls on another for the most part of the day therefore thereby restricting the access of natural light to lower floors. At Rohan Akriti, we have completely eliminated this problem by establishing a 1:1 ratio between the height of the building and distance between two towers.

As you can see, the distance between the two towers is 43 meters and the height of each tower too is 43 meters. This, in turn, minimizes the problem of the shadow of one tower falling on another, leading to well-lit homes in both the towers even at the bottom most floors for the majority part of the day.

Now everyone spends most of their time in social interactions, whether at work or elsewhere. Your home becomes your personal space, the only place where you can be yourself, without interference. Your home must provide you peace of mind and the freedom to pursue whatever you wish to do. Often, one needs to compromise on privacy when deciding to live in an apartment complex. But, not at Rohan Akriti! 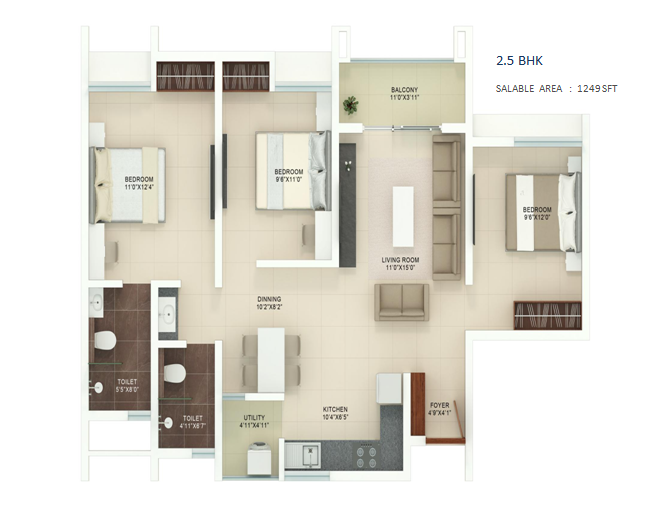 This is a typical 2.5 BHK unit plan of a home in Rohan Akriti. You can notice clearly the privacy aspect that has been incorporated into the internal planning of all the units. Notice the placement of the foyer, which does not allow your newspaper man or milkman peep into your bedroom or the kitchen. Even the guest room at the extreme right is placed in such a way that the other two bedrooms can maintain their privacy. The internal plan displayed above has been replicated in all of the size variants at Rohan Akriti.

It is commonly believed that more space makes for a better home. As a home buyer, you pay for every square foot of space, but often you would find that certain pockets of space turn out to be purposeless. Fitting a piece of furniture into a square shaped room or trying to make use of an unwanted corner are among some of the challenges posed by thoughtless planning.

At Rohan Akriti, you will find the finesse of our engineering in every square inch of space provided. The interiors are well thought-through and functionality designed to induce a feeling of openness. So much so that every bit of space inside the home can be effectively put to use, with absolutely no wastage. 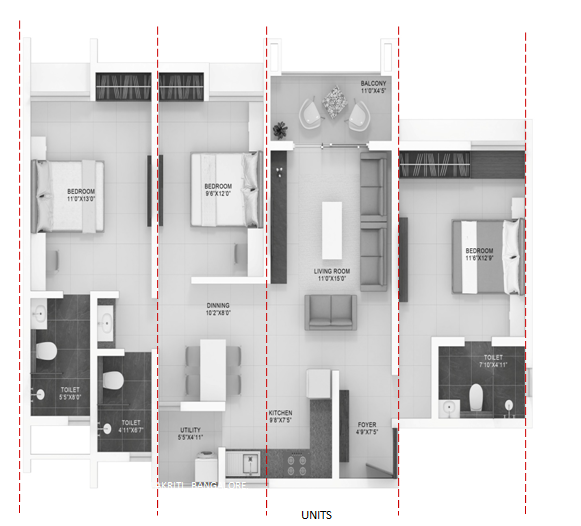 You can notice that all the walls are parallel to each other in order to provide maximum utilisable area.

The L-shaped design not only supports ventilation but also supports the concept of Smart Space. With the help of this design, unwanted walls have been removed. As you can notice, each space seamlessly flows into another and there are no unnecessary corners, corridors or passages, or dead spaces. And that is why Rohan Akriti homes have been called ‘Diligently Designed Homes’.

Single duct for toilet and utility:

We have also done value engineering at Rohan Akriti. The ducts as you can see below are strategically placed so that the toilets and utilities use a single duct. This helps in reducing maintenance costs due to better access to plumbing. This is another useful value engineering which is unique to this project. Usually, in most apartment bedrooms, the minute you put your wardrobe, which is almost 2ft wide, it juts out, and eats into your open space making the usable bedroom size that much smaller. At Rohan Akriti, niches or recesses have been created in the walls into which the wardrobes are tucked in. Hence, in a bedroom of say, 13ft x 11ft, this entire area is clear space, utilisable or open space.

Windows are placed next to the recessed wardrobes. By recessing it the chajja is avoided, and the windows are always in shade.

This helped in evolving the elevation of the buildings as well. So it’s not a cosmetic treatment of the elevation, but something that has come out from the functional aspect. The diligently designed home that is Rohan Akriti – Enquire Today! 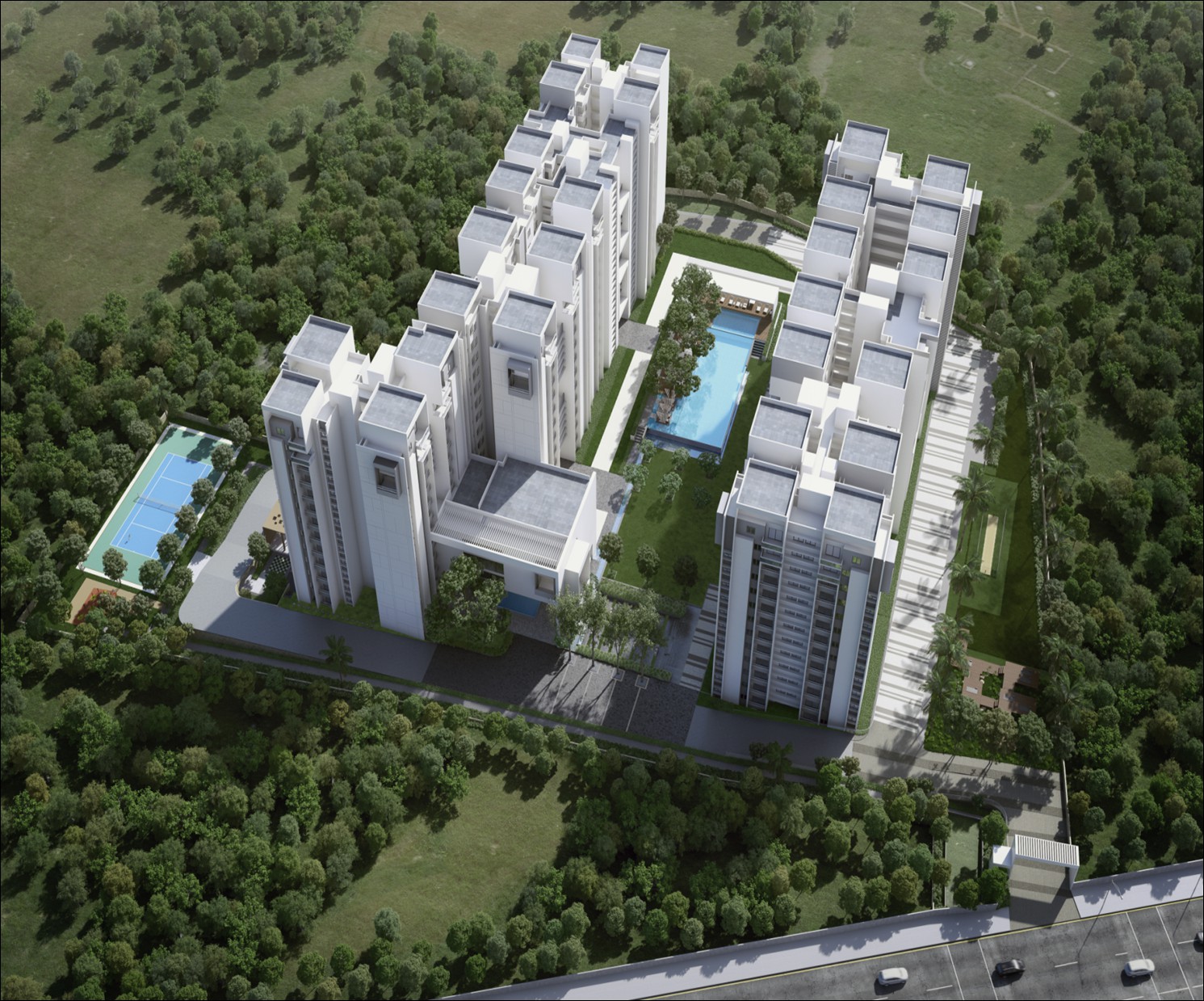 Being located 1Km off Kanakpura, Rohan Akriti stands at a well connected, pollution free and plush green location. The concept of PLUS Homes makes Rohan Akriti one of the most preferred residential apartments in the area. Now that you have read so much about it, you should go see the best example of Rohan Builders’ philosophy of Great Living, Engineered.